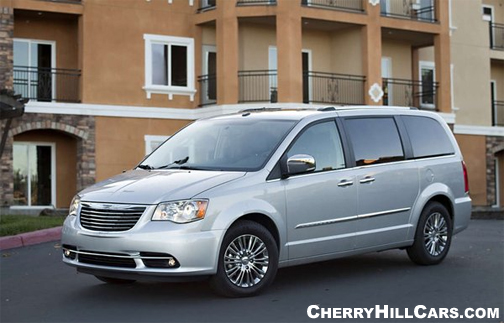 From philly.com:
Thirty years ago, Chrysler’s tinkers put a van body on a car-like front-drive platform and the modern minivan was born.

A flexible beast of burden good at hauling both people and cargo, the Chrysler, Dodge, and Plymouth minivans became a big hit in suburbia – and thus played a large role in the company’s escape from insolvency. Their considerable profitability was why the folks at Chrysler called them “the crown jewels.”

Indeed, Chrysler gets more than a third of the apple. It gets more than half. U.S. sales of Chrysler’s three minivans -  Chrysler Town & Country, Dodge Grand Caravan and a pure cargo variant called the Ram Truck Cargo Van – totaled 260,287 last year. That’s almost 16 percent of Chrysler’s total vehicle sales for 2012, which was 1.61 million.

The minivan has been able to stay in the half million-per-year sales range, in Velisek’s view, because of the functionality edge it holds over crossovers. Simply put, it’s roomier than most crossovers. I can’t think of a crossover that will carry a 4-by-8 sheet of plywood.

The Chrysler Town & Country and the Dodge Grand Caravan utilize the same architecture and mechanicals. The difference is in their amenities and price. The Dodge has a base price of $19,995, which is rather remarkable for a minivan that has 144 cubic feet of cargo space, gets good pep from its 3.6-liter V-6, and boasts EPAs of 25 m.p.g. on the highway.

The Town & Country, while it uses the same bones, the same 280-horsepower Pentastar V-6, and the same six-speed automatic, is markedly more upscale. The base Touring model starts at $30,395, and the top-of-the-line Limited opens at $40,395. The middle-of-the-pack Touring-L that I spent a recent week in based at $33,395.

Thanks to a great turnout from community members, the Chrysler brand will award five schools $5,000 in additional funding through the Drive for the Kids™ program for their achievement of an excessively high number of test drives at their location. The five schools are:

“The Chrysler brand is committed to enriching the lives of youth across America,” said Saad Chehab , President and CEO – Chrysler Brand, Chrysler Group LLC. “Awarding $5,000 to each of the five schools that exceeded expectations for community participation at their local Drive for the Kids™ event is our way of rewarding sincere efforts made by the community to show support for further educating local students and raising funds that will help to sustain important educational programs.”

Through Drive for the Kids™, participating schools received a $10 contribution from Chrysler brand on behalf of everyone who took a brief test drive in a Town & Country minivan—highest ranked in loyalty 11 years in a row—or another Chrysler brand vehicle that was available for test drive on the day of the test drive event.

Since 1993, when Drive for the Kids was first introduced, the Chrysler brand and its dealers have worked with parents and educators in communities across the nation contributing more than $4 million directly to local schools for student needs. From playgrounds and field trips to reading programs and new computers, the Chrysler brand is proud of this tradition of community involvement.

For the latest product and brand news from Chrysler brand, visit www.chrysler.com.

About Chrysler Brand
The spirit of hard work. Earning your place without forgetting where you’re from. That’s what the Chrysler brand and its vehicles are all about. Integrating the first eight-speed automatic transmission in a domestic luxury sedan, the 2012 Chrysler 300 sedans offer world-class innovation and quality while delivering stylistic distinction and premium features with legendary value. Chrysler’s 200 sedan inspired the brand’s identity: “Imported from Detroit.” The 2012 Chrysler 200 sedan delivers exceptional value without compromise with sophisticated design, high-quality craftsmanship, and technology. The Chrysler 200 Convertible—with a power soft or hardtop—offers an open-air experience featuring elegant craftsmanship. The 2012 Chrysler Town & Country minivan is beautifully crafted with high-quality, soft-touch materials and tech-savvy entertainment features and smart storage. Standard leather Stow ‘n Go® seating, overhead DVD, and more than 40 safety and security features are some of the Town & Country’s innovative offerings.

Each year, Consumer Guide® Automotive editors analyze, compare and evaluate numerous vehicles by driving and extensively testing all major models in 19 vehicle categories. Those models that best fit the needs of the consumer are recognized with a “Best Buy” accolade.

“We are honored to have five of our vehicles, including three Dodge vehicles, recognized by Consumer Guide® Automotive as Best Buys for 2013,” said Doug Betts, Senior Vice President — Quality, Chrysler Group. “These awards are proof that Chrysler Group creates cars, trucks, crossovers, minivans and SUVs that both customers and critics appreciate.”

A Consumer Guide® Automotive Best Buy Award rating signifies that a vehicle is ranked at the top of its class and is strongly endorsed by the editors.

“The Chrysler Group turnaround has been a treat to watch. In a few short years the company has made revolutionary gains in terms of drivetrain sophistication and materials, and assembly quality. Chrysler really feels like an all new entity.” – Tom Appel, Publisher

About the Chrysler Town & Country
The inventor of the segment, and America’s most trusted minivan, Chrysler Town & Country has features like one-touch Super Stow ‘n Go to go from carrying passengers to hauling cargo in a matter of seconds. The only minivan to offer standard leather & DVD player on all models, Town & Country offers features the competition can’t match. Features like the all-new segment-exclusive Blu-Ray dual DVD system with a High-Definition Multimedia Interface (HDMI) input for video game systems, a 115-volt power outlet HDMI input for gaming systems and two USB ports for phone or MP3 player charging.

About the Ram 1500
The 2013 Ram 1500 marks a milestone for Ram as this truck delivers best-in-class fuel economy of 18 MPG city and 25 MPG highway with a truckload of pioneering, fuel-saving systems including a more fuel efficient and more powerful 3.6-liter V-6 engine and first-in-segment technologies: eight-speed TorqueFlite 8 transmission, stop-start and active aerodynamics, including grille shutters and air suspension. Ram engineers changed every area of the truck — from a newly designed frame to new engines and transmissions to a new interior with the next-generation Uconnect® system. With best-in-class ride and handling and best-in-class aerodynamics, the 2013 Ram 1500 delivers unmatched content, performance and capability to truck buyers. The 2013 Ram 1500 is available in nine trim levels and starts at $23,585 including $995 destination charge.

About the Dodge Grand Caravan
America’s best-selling and most awarded minivan ever is also the most affordable seven-passenger minivan in America, with a starting U.S. MSRP of $19,995. The Inventor of the Minivan — the original and still the best — also is the most versatile vehicle in its class with 81 different seating configurations and second-row one-touch Super Stow ‘n Go seating. The standard 3.6L Pentastar V6 FFV engine with a six-speed automatic delivers best-in-class horsepower (283 hp) and towing (3,600 lbs.) with 25 mpg highway and is a Ward’s Automotive “10 Best Engines” winner.

About the Dodge Journey
Dodge Journey is the fastest growing, most versatile and most affordable seven-passenger crossover in its class, and is the only vehicle in its class to offer four or six cylinder engines, front or all-wheel drive and five or seven passenger seating. With a starting U.S. Manufacturers’ Suggested Retail Price (MSRP) of $18,995 (excluding $995 destination), the Dodge Journey is the most affordable vehicle in the United States with available seven passenger seating. New for 2013, Dodge Journey R/T has a new high-performance suspension, dimpled leather seats and heated steering wheel with red accent stitching. Crew models now receive a no-charge leather interior with heated front seats and steering wheel, giving customers even more value.

The available Pentastar 3.6-liter V-6 engine has a best-in-class 283 horsepower, and the standard four cylinder engine delivers 26 miles per gallon on the highway. The Dodge Journey has been named an Insurance Institute for Highway Safety (IIHS) Top Safety pick for four consecutive years and carries a 5-year/100,000-mile limited powertrain warranty. With 67.6 cu.ft. of cargo space with all seats folded and in-floor storage bins in front of second-row seats, Dodge Journey packs a lot of utility in a mid-size crossover package.